Today is the 200th Anniversary of Alexander Wilson's death.

To be honest, a month ago I didn't know much about Alexander Wilson, but, in the last few weeks I have daily added to my knowledge about him (thanks largely to my hubby, Rick). I have even been to the cemetery where Wilson is buried (if you think a cemetery is not a very romantic place to spend time, let me tell you that before we were married Rick took me to a sewage pond--you birders will understand!)

At any rate, I have become increasingly fascinated by this young man who was a few years older than I when he died (and had achieved significantly more--I have some major catching up to do). Though he appears not to have appreciated Bloomfield, NJ, where he lived for a short while (and where we now live), I have to respect him for his talents--in particular I am impressed with his artistic depictions in American Ornithology.

But I was even more impressed (not necessarily positively) with his words about the Killdeer. I have a partiality for plovers--perhaps because years ago I saw a film adaptation of Brideshead Revisted and the one scene that has stayed in my head is when the protagonist talks about his mother having sent him plover's eggs to eat, a scene that made me feel I need to protect plovers from omnivorous humans.

Wilson offers two fascinating tidbits: one, "There [in South Carolina planters' yards] the negro boys frequently practise the barbarous mode of catching them [the killdeer] with a line, at the extremity of which is a crooked pin with a worm on it" American Ornithology, p. 158;

and two, "Their [killdeer] flesh is eaten by some, but is not in general esteem, though others say, that in the Fall, when they become very fat, it is excellent." (ibid) 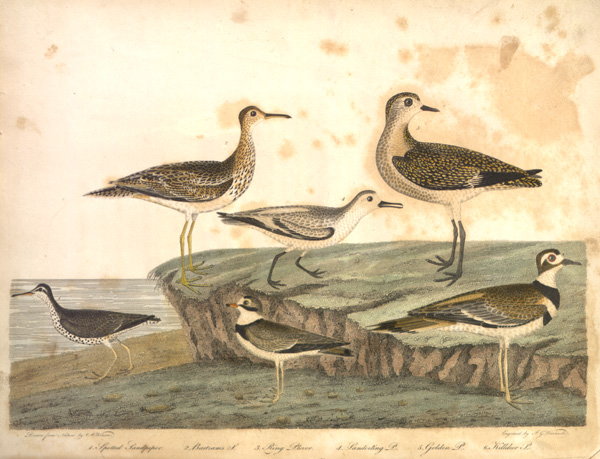